Anne-Kathrin Elisabeth Dern (*July 30, 1987) is a German film composer and CEO of e-Quality Music Productions LLC, currently residing in Los Angeles, California. She is mostly known for her scores to the animated Netflix Original Fearless (2020), the Netflix Christmas movie The Claus Family (2020), Disney's Four Enchanted Sisters (2020), and SONY's Help I Shrunk My Parents (2018), as well as her collaborations with Klaus Badelt, most notably on the animated movie Leap! (2016) and the iGG video games Castle Clash (2019), Lords Mobile (2018), and Galaxy Mobile (2020). Dern also contributed music to both seasons of ABC's musical comedy series Galavant (2015-2016), as well as Microsoft's HALO V: Guardians (2015), and wrote additional arrangements for Warner Bros. Ocean's 8 (2018). She has collaborated with and assisted composers such as Christopher Lennertz, Alan Menken, Steve Jablonsky, Ryan Shore, William Ross, and Pinar Toprak. Additionally, she has interned at Hans Zimmer's Remote Control Productions and was a selected participant of the 2016 ASCAP Film Scoring Workshop with Richard Bellis. Dern just completed her work on the comedy-adventure sequel Help I Shrunk My Friends (2021), and has been signed to write the score for the WWI drama The Last Front (2021), starring Iain Glen and Sasha Luss.

Dern was born in Eutin, Germany, and studied at the private film scoring academy Musicube in 2007/2008, followed by a Bachelor's degree in Film Scoring at the acclaimed ArtEZ Conservatory (Netherlands) from 2008-2012. The Film Scoring Certificate Program at the University of California Los Angeles (UCLA) concluded her formal academic studies in 2013.

From early 2013 until late 2014, Dern has been known to work for Cinesamples. As part of their in-house team she helped develop new virtual instruments as well as updates to existing libraries. After resigning from her full-time position at Cinesamples in late 2014, Dern continued to sporadically work for other sample developers, including SonicSmiths and VIR2 / Big Fish Audio. She also programmed a private percussion library for the music production and publishing company Ninja Tracks. (For a full product list, please see Credits.)

Cinesamples' sister company Hollywood Scoring hired Dern in 2014 as a mockup artist and full-time staff composer. As part of the team she worked on productions like Riot Games' League of Legends, Microsoft's HALO V: Guardians, Disney's The Pirate Fairy, Fox's Gracepoint, and many more. A mockup she created for Alan Menken ultimately led to her being brought onto the Galavant composing team. Being located at Christopher Lennertz' Sonic Fuel Studios she transitioned into being a writer / arranger for his score on the first season of ABC's medieval musical show in late 2014 / early 2015. At the same time she also worked as a temporary orchestrator and technical assistant at William Ross' studio Momentum.

Throughout most of 2015, Dern worked with Pinar Toprak on the Warner Bros. / Skydance production Geostorm, starring Gerard Butler. She also collaborated with composer Ryan Shore on his animated series Penn Zero: Part-time Hero and his Universal movie Monsterville: Cabinet of Souls. Later in 2015, Dern also worked as a temporary assistant at Steve Jablonsky's studio Arata Music, lending a hand on The Last Witch Hunter, starring Vin Diesel. In fall 2015, Dern resumed her work for Christopher Lennertz and Alan Menken on the second season of Galavant.

Shortly after deepening her knowledge during an internship at Hans Zimmer's Remote Control Productions in early 2016, composer Klaus Badelt invited her onto his writing team for the animated movie Leap! (aka Ballerina), starring Elle Fanning. While working on several theme park rides with Badelt, Dern was also selected as one of 12 composers (out of over 300 applicants worldwide) for the annual ASCAP Film Scoring Workshop with Richard Bellis.

In early 2017, Dern collaborated with composer Emir Isilay on the Pakistani drama Saawan. Their score was nominated for Best Original Score at the Madrid International Film Festival and later won the Best Soundtrack Award at the Salento International Film Festival. This production was quickly followed by the Chinese-American drama The Jade Pendant based on the novel by L.P. Leung, and the German fantasy movie Lilly's Bewitched Christmas (aka Hexe Lilli rettet Weihnachten) based on the popular children's books by Knister. Both scores led to several positive nods by critics and garnered her a coveted IFMCA nomination for Breakthrough Film Composer Of The Year. In spring 2017, Dern was chosen as one of the 10 female composers for the first installment of the Future Is Female concert series, produced by composer and singer Tori Letzler. Dern conducted the Hollywood Chamber Orchestra led by concert master Mark Robertson throughout the second half of the concert and contributed her suite from The Jade Pendant. Several other feature film productions followed, including the indie drama Captain Black by Jeffrey Johnson, a German kid's comedy called Help I Shrunk My Parents (aka Hilfe, ich hab meine Eltern geschrumpft), and - resuming her work with Klaus Badelt - the Chinese drama Legend Of The Demon Cat by Chen Kaige. Dern also collaborated with British composer Daniel James on a Mongolian play (Legend of the War Horse) and worked on iGotGames' Lords Mobile, once again with Badelt.

In early 2018, Dern and Badelt co-composed the score for the animated movie Wish by Prana Studios, while Dern also contributed an orchestral arrangement of Chris Braide's title song Back To Earth for the animated movie Trouble. She also wrote the score to Enrico Natale and Elease Patrick's short film Broken and contributed additional arrangements to Warner Bros. female-led crime reboot Ocean's 8. 2018 saw several critical nods go towards Dern, as she got nominated for several HMMAs, the Jerry Goldsmith Awards, the Fimucinema Award, and eventually won the BIFF Award for her short film score to Friend of Gold.

Dern started off 2019 with the Disney / blue eyes Fiction production Four Enchanted Sisters. She recorded and conducted the score with musicians from the Brussels Philharmonic and contributed several song arrangements as well. She also collaborated with director Farhan Alam on his Pakistani drama Allahu Akbar. Shortly after, she wrote the score to the animated science-fiction superhero movie Fearless, starring Susan Sarandon and Gabrielle Union among others. The score was recorded at Abbey Road Studios (London) and released through Roc Nation's indie label Equity, along with the song Imperfect, which Dern produced and co-wrote with artist KIA. Together with Klaus Badelt, she also contributed music to two more mobile games by developer iGotGames - Galaxy Mobile and Castle Clash - which they also recorded at Abbey Road.

In early 2020, Dern worked on blue eyes Fiction's comedy sequel Help I Shrunk My Friends (aka Hilfe ich hab meine Freunde geschrumpft) which she recorded once again at Galaxy Studios in Belgium. Together with singer-soulwriter KIA and composer-producer Lars Hempel, she also co-wrote the two title songs of the movie (What Friends Are For, Unstoppable). She has also contributed additional music to the feature documentary Angle, starring Dwayne Johnson, and to the Netflix short film If Anything Happens I Love You. Dern recently finished her score for the Netflix Christmas movie The Claus Family, which she recorded with the FAME'S Macedonian Orchestra. She also once again produced the title song for the movie, Still Here, together with actress / singer Pommelien Thijs. Dern has been signed to write the score to the WWI drama The Last Front next, starring Iain Glen and Sasha Luss. A sequel to The Claus Family is already in the works as well.

Dern's international catalogue ranges from the US to Canada, China, Mongolia, Japan, Belgium, the Netherlands, Italy, Pakistan, Germany, and France. Her scores are frequently recorded at AIR Lyndhurst and Abbey Road Studios in London by the LSO and LMO, and at Galaxy Studios in Belgium. She has a 3 year deal with the soundtrack label MovieScore Media which frequently releases her scores. As part of her initiative to promote the visibility of ethnic and gender minorities in film scoring, Dern has become an elected board member of the AWFC and was invited to a roundtable at Output as part of the Future Is Female concert lineup. She was also featured on the cover of Cinema Musica magazine in June 2018 and is part of Orchestral Tools' LA Creatives series. Dern was a featured speaker for AVID Technologies at NAMM in 2019, as well as a panelist at Comic Con in San Diego and at the annual SCL panel Tunes for Toons. In fall 2019, one of her pieces was featured in Amy Andersson's Women Warriors: Voice of Change concert at Lincoln Center, NY. Additionally, she is the first female composer to establish an educational YouTube channel, in an effort to provide visibility and free knowledge to the aspiring composer community. Dern is a member of the performing rights organizations ASCAP and GEMA. In fall 2020, she received the ASCAP Steve Kaplan Award for her achievements in the film and TV industry, and her continued educational and social efforts for the composer community. 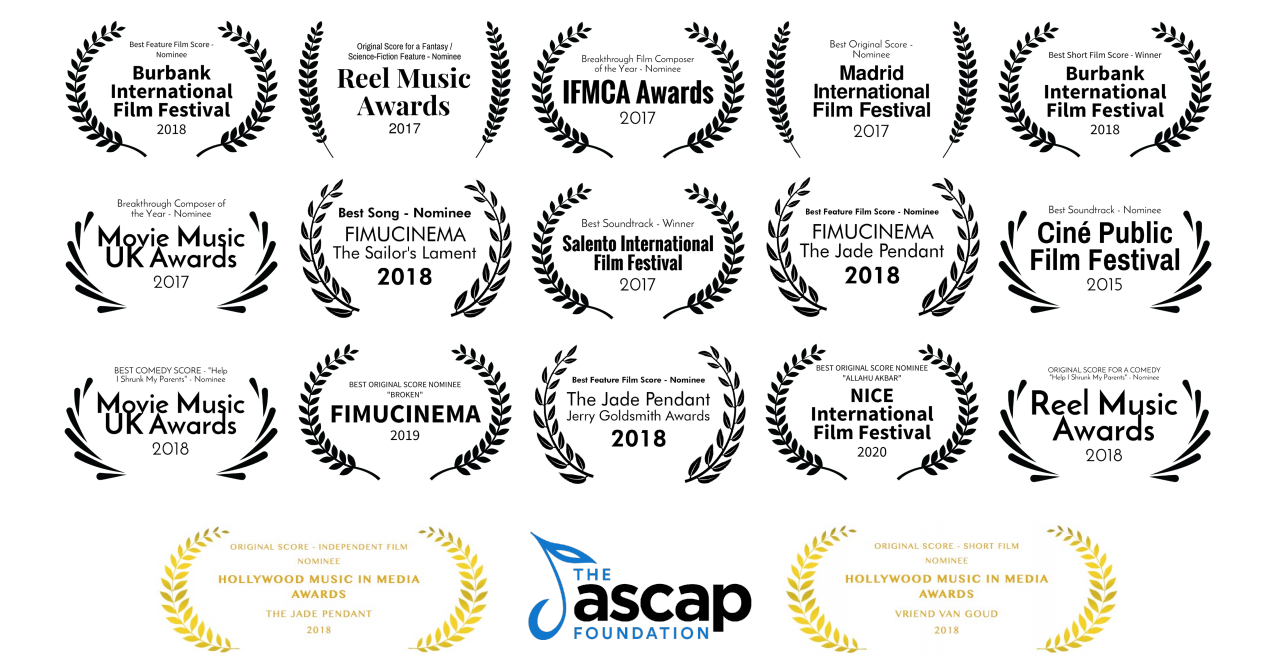